This is the second blog post of the inspiring story of Sabre and what it is like from an owner’s prospective owning and training a reactive dog. I thank Debbie for sharing her story with us and hope this gives you the encouragement as a reactive dog owner to keep up the good work!

Where do I start? The crying with pain because of the dreadful pulling, spinning, and lunging when on a lead? The terrifying act of you lunging, snarling and wanting to attack every dog? The tears of loneliness of having an aggressive dog that no one wanted to come near? The despair of not knowing what to do and who to talk to? The lack of support at home because now I’m told that he didn’t really want a dog and think I should give you back, in fact make a choice! I can totally understand why you never stayed more than a few weeks in your other re homes, but I was nothing but stubborn. I had made a commitment and I could see in your eyes how desperately you were trying to communicate, I just didn’t understand!

We saw a lady with a young bitch cocker/poodle mix, a very sweet girl who we could actually be fairly close to without you acting like a werewolf at full moon. Chatting to the owner she told me about a Kennel Club training group in the next village, maybe I should go? In the meantime I had joined a couple of Facebook dog groups and was pouring my despair out in random posts and not really understanding the advice given.

I emailed the owner of the training group and explained your ‘issues’ shall we call them, she said come along with you and watch a few times. So we did, you behaved very well actually, bored of having to sit or lie down while the puppies were doing their thing. You even tried to initiate play with the trainers very laid back retriever bitch! So you didn’t hate all dogs at all!

In the meantime I was beginning to understand a little about distance and treating so there I was, up a bank, standing in the middle of a ploughed field, down a bank or ditch, even standing in the river just to give you space from other dogs. We started to see another friendly bitch that you did your act to, but over time you would be calmer so I could actually talk to the owners. We used to see each other out walking occasionally and we would follow along.

Then you bit a dog and you bit me! The first bitch that we had been seeing occasionally though no sniff and greet yet, was out with the owners son. He stopped to say hello and offered you a treat, when he went to give his girl one, you attacked her, giving a small puncture wound to her neck. I was distraught, now here would come the dangerous dog act, the muzzle order, possibly a fine. I offered to pay for the vet treatment but the lady owner was fine about it, poor Pippa, now she was frightened too! My entire ignorant fault!

You biting me, I now realise was just redirected frustration. We had gone a different way at the opposite end of the village and walked straight into cows! Of course they started crowding round and one followed us all the way back to the road, actually doing little charges at us, you were wound up and trying to attack the cow behind you. Then we got to the exit and a few dogs started barking behind the fence, you started lunging, snarling and spinning so again in my ignorance (which is a running theme through the start of your journey) I shortened your lead, bam you bit my leg! Immediately you cowered away, I was incapable of speech and walked home in a daze! I believe I actually posted about it and was advised to brush it off, forget about it, tomorrow is a new day!

First session at dog training was good, you couldn’t see the point in sit when we stopped so you lay down, you just huffed and puffed when a dog got to close. We were in the puppy class as the trainers thought they would be less of a threat. Second session the other owner was there, a man who already had said he cant understand the food rewards and still uses a choke collar, should have been a warning of what was to come! Well this week there was a new dog in the class, a year old male border terrier who was very vocal. Understandably you didn’t want him near, you didn’t lunge but growled at him. The first time the man threw his car keys on the wooden floor in front of you and shouted NO! What? I should have left then! He disappeared for a minute then came back in, we were walking round the hall when you half lunged toward Mr Vocal and this large tin with keys in was shook in your face! This made you jump and every other dog jump in the room. Uh Oh! I knew this wasn’t right but as we only had 2 mins to go I stayed and saw you teaching a woman on how to keep her puppy Labrador in the down position. Stand on its lead right where it joins the collar! I left quietly and never went back!

Just you and me Sabre, we can do this!

Two months in now, coming up to Firework night! Came home from work and your tail twitched, yes, twitched! I honestly thought that because it was so tightly curled that it physically couldn’t wag, I nearly cried! We were still walking at sleep times for most people in the morning to avoid dogs, you were still being a steam train on lead, and you were still lunging though I was beginning to manage it better, thank god for the internet! I found that the distance would vary with different dogs on how you would react.

Sky a GSD bitch we began to see fairly regularly and you stopped lunging at her, so we could close the distance and actually began to talk to the owners. They totally understood as in laws had a reactive Retriever who after 6 years has improved. 6 years??! I didn’t expect you to be friends with every dog but to be able to walk past without a reaction would be nice.

5th November arrived and you were frantic, racing about, leaping up at the walls and windows barking. Nothing would distract or calm you so I turned to one of the Facebook groups, ‘Put a t shirt on him’ seemed to be the consensus but watch that he doesn’t shut down! So there you were rocking a vest top of mine, within 5 mins you were lying down in front room then after 30 mins out sleeping in your spot by the front door. I kept checking on you, what does shut down look like I thought? I needn’t have worried; you had assumed your normal sleeping position, typical Northern breed style.

I was looking at harnesses for you so went to a supplier of Perfect Fit near me; you embarrassed me by cocking your leg in the shop ooops! Bought a harness and a double ended lead and tried it on and walked you up the lane, very similar to reins on a horse, wasn’t expecting a quick fix, knew it would take time but Id rather you pulled on a harness than a collar choking yourself. Within a few days realised that the harness wasn’t a perfect fit but a copy and was too big for you, people ignored my emails and calls, I even drove out there but closed up! Id been had, I’m in my 40s and I was/am so gullible, I am too trusting I know! With a long-line it meant that we could go into fields and you could run and be a dog!

Now comes my first proud mummy moment! We had started actually walking along with Sky and you loved her, but loved her owners more as you would go past Sky to greet them first, leaning up against their legs with a big silly grin on your face. We were walking back and came to our parting of ways and Simon said I’m going to give them both a treat, I said I’m not sure how that will go remembering what happened with Pippa. But you sat next to Sky and watched her having a treat then you had one, again I cried! Little steps I kept reminding myself, little steps.

Please join us for our next blog installment concluding Sabre’s journey and rescue story: 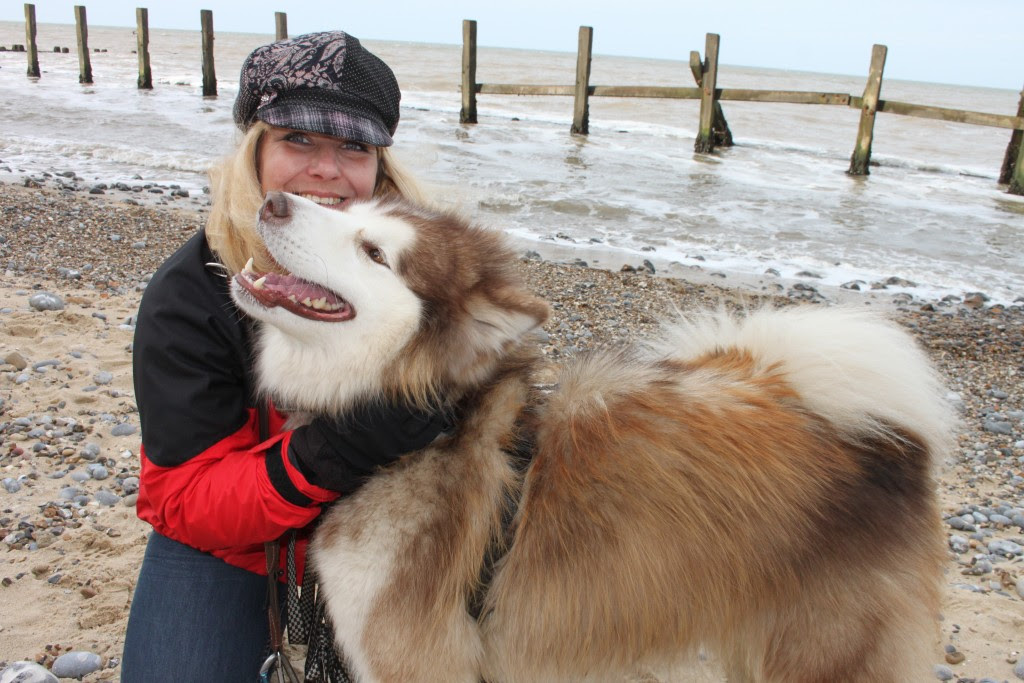