Sabre’s story, parts one & two – re homing and rehabilitating a reactive dog

This is Sabre’s story. A story about trust and loyalty, and never giving up on your best friend. This will be in three parts and I thank you all for taking the time to read this inspiring story. Owning a reactive dog is a 24 hour job, it is so different being an owner rather than only a trainer of a reactive dog. As a trainer you work a set amount of hours, building a bond with the dog and a positive relationship with the owner. But as an owner of a reactive dog you can’t just simply give the dog back at the end of the day, you are working to rehabilitate your dog 24/7. Life can be a challenge, there’s times you almost feel like giving up, but hopefully you as an owner of a reactive dog will be assured that the hard work does pay off and can follow in the inspiration of Sabre and her dedicated owner Debbie.

This story will be shared in three separate blog posts:

I can’t remember the day I first saw your face but I remember the bolt to my heart. You popped up on my news feed and I thought, well I didn’t think, I felt, bam! I couldn’t stop thinking about you, why were you there? Were you being looked after ok? How long had you been there? I see lots of pics of dogs needing re homing but there was just something about your face that touched me. Over the next few months your face haunted me, appearing occasionally on my screen. It wasn’t feasible to have you; my partner had just lost his pal after 18 years and had all the right answers why we shouldn’t. A tie, we can’t just up and away, commitment, money we didn’t really have, secretly I think he really meant it was less attention for him!

I researched your breed and your traits, hmmm holes, howling, could dislike same gender but what about the cuddles and devotion we would both receive?

Some months later I got married and the day after the wedding I showed my new husband your photo again and said ‘please’. What newlywed can say no to his beloved? So a day after we got back into the UK I drove 300 miles to see you with the last words I said ‘ I won’t do anything silly, don’t worry’ forgotten!

I waited for nearly an hour before you were brought out of the kennel to me, what a mess! You stank and your coat was blowing and faded. You had been living in a field for 5 months with just the underneath of a caravan for shelter .I showed the rescue owner photos of my garden worrying that I wouldn’t be suitable! I took you for a walk; you ate every bit of sheep poo and pulled my arm out. The lady said when I got back that you understand this and yanked your choke chain! Mmmmm got to get you out!

I paid my money, bundled you in the car and drove 5 hours home, windows down to try and counter the stench! I kept stealing glances at you in the mirror; you were so quiet, laid down for the whole journey, what a good boy.

I phoned my new husband and said I was driving back and he was in the car! Oh dear, stony silence! Never mind, we can win him round I naively thought!

When I got home I put a lead on you and took you round your new garden to explore then into the house. You just laid down in the front room and for a young dog you looked old and oh so sad! Welcome Sabre to your forever home.

I heard you howl in the night, oh so mournful, what was wrong? Were you wondering where you were, did you need me to reassure you, were you unhappy? I took you into work the next day; luckily we had no courses booked so you could just lie in the tea area. You reminded me of Pig Pen from Snoopy, god you stank! I knew you needed to be bathed but wanted to give you a few days first to get used to me.

You went into my colleague’s office and was sick. I rushed in and nearly panicked thinking you’d thrown up your gut lining! It was large, black and wrinkled, on closer inspection realised it was a sock! Phew! You loved Dawn and leant against her legs which I discover later is your way of saying ‘I trust you’.

Took you for your walk when we got home and you pulled like a train, bounced, span, huffed, puffed and just seemed to be on hyper alert. We saw another dog and you turned into a snarling, lunging werewolf! What? I saw the looks on the ladies faces, yes you looked a state and here you were acting like the typical ‘aggressive’ dog everybody warns you about. My heart sank and I realised that the Rescue had not told me the full story. Yes I knew I was your 4th home and you weren’t even 3 and had been in the rescue for 2 years. Maybe I had bitten off more than I could chew! But there was no way you were going back there! I had made a commitment and that was that.

You love our garden and soon discovered the chickens next door so you guarded for hours that stretch of fence, thank goodness your digging instincts didn’t kick in otherwise you would have had a full belly.

You’d been with us for 3 days so decided it was bath time, you just stood in the bath, head down while I was in with you showering you and shampooing while Bob held you. You were so shut down it was pitiful. I must admit you smelt a lot fresher though your coat was badly in need of grooming; I tried but was getting nowhere so booked you into the Professionals. You had 2 appointments over 2 weeks, 2 bin bags later you were done! They had to clip a section along your spine as it was so badly matted it had felted, 9 months later the undercoat has grown but not the guard hairs….yet! You looked beautiful, sleek, half the size and sweet smelling!

Next appointment was with a behaviourist, I didn’t know what I was looking for, I was old school and knew nothing of modern training or the terminology, but then Id never had a dog like you before either! Even though I knew nothing I thought the woman was useless, didn’t tell me anything or suggest anything apart from selling me figure of 8 headcollar to help stop you pulling, like a mug I bought it! You hated it and 1 swipe with your paw got it off everytime!

Still pulling, spinning, snarling, lunging while out on walks it suddenly hit home I need help, I had never had an ‘aggressive’ dog before, the villagers were talking about me and ‘that’ dog! HELP!

Please follow Sabre’s full story in our next blog: 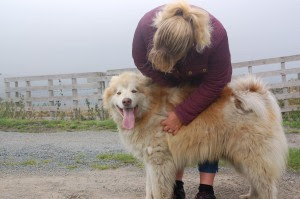